Although both Democrats and Republicans in Washington were united in their support for Israel, a series of polls conducted at the time found that Democrats and Republicans in the public were not aligned with them: in a Pew poll, for example, 60 percent of Republicans blamed Hamas for the violence, while Democrats were more evenly split, with 29 percent blaming Hamas and 26 percent blaming Israel. A Gallup poll detected a similar pattern: 65 percent of Republicans thought Israel’s actions were justified, but Democrats were more divided, as 31 percent backed the Israeli response, and 47 percent called it unjustified. 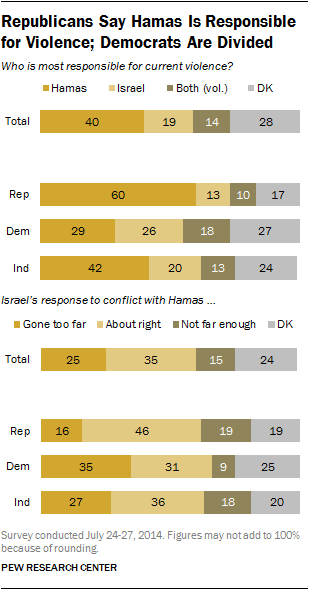 This pattern—where political elites are united but the public is not—is particularly interesting for political scientists because it violates the widely held assumption that the public knows relatively little about politics (especially foreign affairs), and thus structures its beliefs by taking cues from trusted partisan elites. But if the mass public knows so little, and can only regurgitate carefully tailored talking points, why does it often disagree with what elites have to say?

In a new working paper, Weatherhead Center Faculty Associate Joshua D. Kertzer, assistant professor of government at Harvard University, and Thomas Zeitzoff, assistant professor at the School of Public Affairs at American University, argue that these partisan “elite cue” models are unnecessarily restrictive. The public may often lack information, but it doesn’t lack principles—and because cues are the most persuasive when they come from trusted sources, information need not only cascade from the top down. In an era when more Americans are turning away from traditional party politics, trust in government is abysmally low, and many of the major political events of the past year have prompted public and elite surprise, it seems plausible that people might take cues from actors other than partisan political leaders.

Kertzer and Zeitzoff offer a “bottom-up” theory of public opinion, in which Americans rely on their core belief systems, and look not just to politicians in Washington, but also to each other to help determine their opinions on foreign policy. The public clearly has a mind of its own. Political scientists therefore need to take into account what the authors call the “meso-foundations” of public opinion: the social context and broader network in which citizens participate. Beyond inducing pressures for conformity, groups and networks are important sources of information in their own right: arguments from our peers can amplify or dampen the resonance of messages from distant elites, particularly given that Americans’ trust in government is consistently lower than their trust in one another.

Given the extent to which elite and social cues overlap (both because strategic elites provide messages they know will resonate with their audience, and social peers are often influenced by messages from elites), disentangling the competing effects of elite and social cues on public opinion is methodologically challenging. The authors turned to surveys, fielding five survey experiments on approximately 4,500 American adults from 2014–2016.

In each experiment, participants were asked to read a fictional newspaper article, presented as real, in which policy makers in Washington were debating a foreign policy issue: for example, increasing American military presence in Asia in response to increased threats from a rising China, or deploying special forces units to fight terrorism in the Middle East. The article each participant read was identical in each scenario, except for two pieces of information that randomly varied across participants.

Second, the authors manipulated “social” cues, purporting to reflect how other survey participants felt about the policy. As was the case with elite cues, social cues were manipulated in different ways in different experiments, either showing support for the policy among generic survey respondents, or showing support from others who were ideologically similar to the respondents. Participants were thus presented with a social cue indicating broad support for the policy, broad opposition to the policy, or a control condition in which no social cues were present.

Across the five experiments, some intriguing patterns emerged. Although elite cues displayed inconsistent effects, social cues—information about other Americans’ foreign policy preferences—were consistently important. Being told that other survey respondents generally supported a particular policy position (for example, US compliance with the International Center for Settlement of Investment Disputes or ICSID) significantly boosted respondents’ own levels of expressed support for the policy, while hearing that other survey respondents generally opposed it significantly lowered their support. Although a variety of potential mechanisms can account for the significant effects of social cues (e.g., pressures for conformity, pressures for attitudinal consistency, and so on), the results seem to imply that respondents use the views of their peers as a heuristic with which to shape their own attitudes. In contrast, cues from party elites display effects that vary dramatically across issues, and vary with characteristics of respondents: Trump voters, for example, care much less about what party elites in Washington think, as do individuals with low levels of trust in government. At the same time, however, voters are not blank slates. In addition to the news articles, participants in the studies were also given a set of survey items measuring their general outlook towards foreign affairs, focusing on two predispositions in particular. The first, military assertiveness, captures participants’ general beliefs about the desirability and efficacy of the use of force. The second, internationalism, measures how large a leadership role participants believe the United States should play in the world. Whereas some models of elite cue theory are quite skeptical about the public’s ability to express coherent judgments in foreign policy without being led by elites, the study results show that individuals’ pre-existing attitudes towards foreign policy exerted consistent and important effects, swamping those of both elite and social cues. In one sense, it is not surprising that individuals who are generally opposed to the use of force are also opposed to American military buildups in East Asia. However, many influential elite cue theories either deny or overlook the notion that ordinary citizens may already have strong opinions about foreign affairs that they carry with them.

Kertzer and Zeitzoff’s results suggest a number of broader implications. The extent to which people care about what other members of the public think (even about relatively technical policy issues) raises interesting questions about the effects of the growing media coverage of public opinion polls in lieu of substantive policy discussion. It is also especially relevant in the age of digital  media, where both search engines and social networks rely on complex algorithms to show users what they think they want to see, producing alternative and often self-segregating information environments whose implications for public opinion are not yet fully appreciated.

Fifty years ago, there were three nightly network newscasts, which were watched by half of all Americans. Critiques of the media’s role in the political process in the ensuing decades centered around concerns about corporate media “manufacturing consent,” uncritically parroting what elites have to say. In the current balkanized information environment, replete with the rise of “fake news” and disinformation campaigns led by state-sponsored “troll armies” with fake online identities, the results of this study imply that concerns about opinion manipulation shouldn’t just focus on propaganda from above, but also on the potential “echo chamber” of self-selecting online communities.

Joshua D. Kertzer is an assistant professor of government at Harvard University and a Faculty Associate at the Weatherhead Center for International Affairs. Thomas Zeitzoff is an assistant professor at American University’s School of Public Affairs. This blog post is based on their working paper, A Bottom-Up Theory of Public Opinion about Foreign Policy.